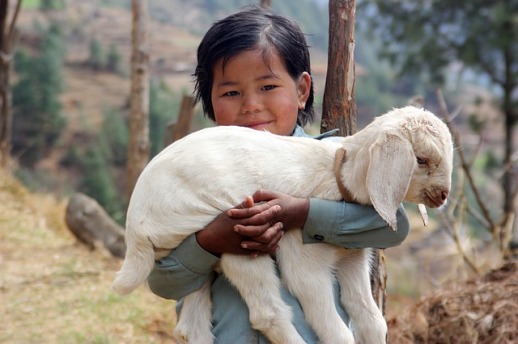 The Nepali community of Sikkim makes up about 70% of the total population with different sub-communities within this large body. They find their roots in the neighboring country of Nepal due to which many of their folktales and children’s stories will be the same. “Dhon Cholecha” or Old Nanny Goat is a very popular Newari children’s story recorded and shared by many people through different sources like films, books and online websites. Much of the story remains the same, but it only seemed fair for us to share our version of it as well. The story goes this way:

Once there was a little girl named Punakhu Maincha. Her mother died when she was very young so her father got remarried and had another daughter with his new wife. Punakhu Maincha’s step-mother was a cruel woman. She would make her step-daughter do all the household chores and would give her very little to eat.

However, despite this Punakhu Maincha looked healthy and well fed. This confused the step-mother, so she told her daughter to spy on her elder sister. Once while Punakhu Maincha was out grazing Dhon Cholecha, the old nanny goat, the step-sister saw the source of Punakhu Maincha’s good health. The nanny goat knew that Punakhu Maincha led a very tough life and so cared for her very much. Thus, whenever the two reached the grazing spot, Dhon Cholecha would vomit out a delicious meal, which would be gratefully consumed by the humble girl.

When the step-mother was told all this by her daughter, the jealous woman made a plan to put an end to it all by killing Dhon Cholecha. When Punakhu Maincha found out that her beloved nanny goat was to be slaughtered for a family feast she became very distressed. However, Dhon Cholecha told her not to fret. She told Punakhu Maincha that if she took her bones and buried them in the garden a fig tree would grow from it and she could continue to feed on its fruits.

Thus, when the dreaded feast took place, Punakhu Maincha pretended to be ill and did not go. She then waited till everyone had gone off to bed, collected the bones of her caring nanny goat and buried them in the garden. Just as Dhon Cholecha had said, a fig tree grew there and Punakhu Maincha fed on its fruits.

One day, while she was sitting on a branch eating the tree’s fruits, an old couple came along and asked her if she could share some of her fruits with them. The kind girl gently threw some at them, but the old couple could not catch them. Each time the fruit would fall on the ground and get damaged. So they finally requested her to pass them some more by coming down herself.

When Punakhu Maincha got down from the tree and gave the old couple some fruits, they asked her to join them for dinner as a reward for her kindness. So they took her to their home. Once there they told her to prepare some flatbreads while they went to wash up outside. The kind and naive girl agreed to do so.

As she was cooking the flatbreads, a mouse scurried out of a hole and said, “If you want to hear something important, give me a flatbread.” Punakhu Maincha gave the mouse a flatbread, but it took it and disappeared. A bit later it reappeared and said the same thing. Once again she gave it a flatbread, and once again it disappeared. The mouse came for a third time, said the same thing, and still the kind girl gave it another one.

This time the mouse finally stayed and told her everything. It told her that the old couple were actually Lakheys [demons] who were planning to eat her. It said, “Pack up as much gold, silver, gems and other treasures as you can and run away, but before you go, make sure you spit and leave a piece of charcoal on every step of the staircase inside the house.”

Later upon their return the demons found the front door of the house locked from the inside. They knocked and asked Punakhu Maincha to let them in many times, and each time the glob of spit and the piece of charcoal replied “Yes” and “Okay”. Finally, growing very suspicious, the demons forced their way in and found that she had gone through the back door.

When Punakhu Maincha reached home with the treasures, she excitedly told her father and step-mother about her adventure. Upon hearing this the greedy step-mother decided to send her own daughter to get even more riches.

So the next day the daughter sat on the fig tree waiting for the demons. They appeared soon enough and took her to their home. Like with Punakhu Maincha, they told the daughter to prepare flatbreads while they went out to wash up. However, when the mouse came and repeatedly asked for a flatbread, she became very impatient and irritated with it. She finally chased it back into its hole with a piece of hot burning wood. As the mouse didn’t get to tell her anything, the daughter had no idea what was going to happen.

So when the demons came back she joined them for dinner and ate the flatbreads with them. After dinner they told her to sleep over at their house as it was very late in the night. The step-mother’s naive daughter did not know any better and agreed. They all went to bed, sleeping side by side, with the daughter in the middle.

When the daughter was fast asleep, the male demon cut away a piece of her flesh with his knife. When she cried in pain, the female demon said, “Did grandfather pinch you?”, and caressed her, pulling her closer. A little later, she also cut away a piece of her flesh. This time the male demon said, “Did grandmother pinch you? Come, lie next to me.” This went on till finally only her bones were left.

The next morning, the step-mother was gleefully combing her hair, waiting for her daughter to return with the treasure, when a crow came along disturbing her self-indulgence. It perched itself on the roof and kept saying, “The mother beautifies herself while the daughter is a skeleton.” Wondering what the crow was trying to say, she went up to the roof and spotted the demon’s house in the distance.

To her horror and dismay she saw that her daughter’s bones had been kept out to dry at the demon’s house. Regretting her greed and jealousy she beat her breast and cried. Upon hearing about what had happened to his younger daughter Punakhu Maincha’s father could no longer care for his cruel wife. Thus, the step-mother spent the rest of her life working hard and being treated more like a servant than as family.