Sitting on the extended plinth of the red and yellow building alongside the Chorten, I watched tourists strike flamboyant poses in front of prayer wheels in rhythmic motion while a traditionally dressed, old lady waited patiently for them to finish so she could go about her rounds. The wind brought around the enchanting aroma of burning butter lamps filling the atmosphere with an air of auspiciousness. 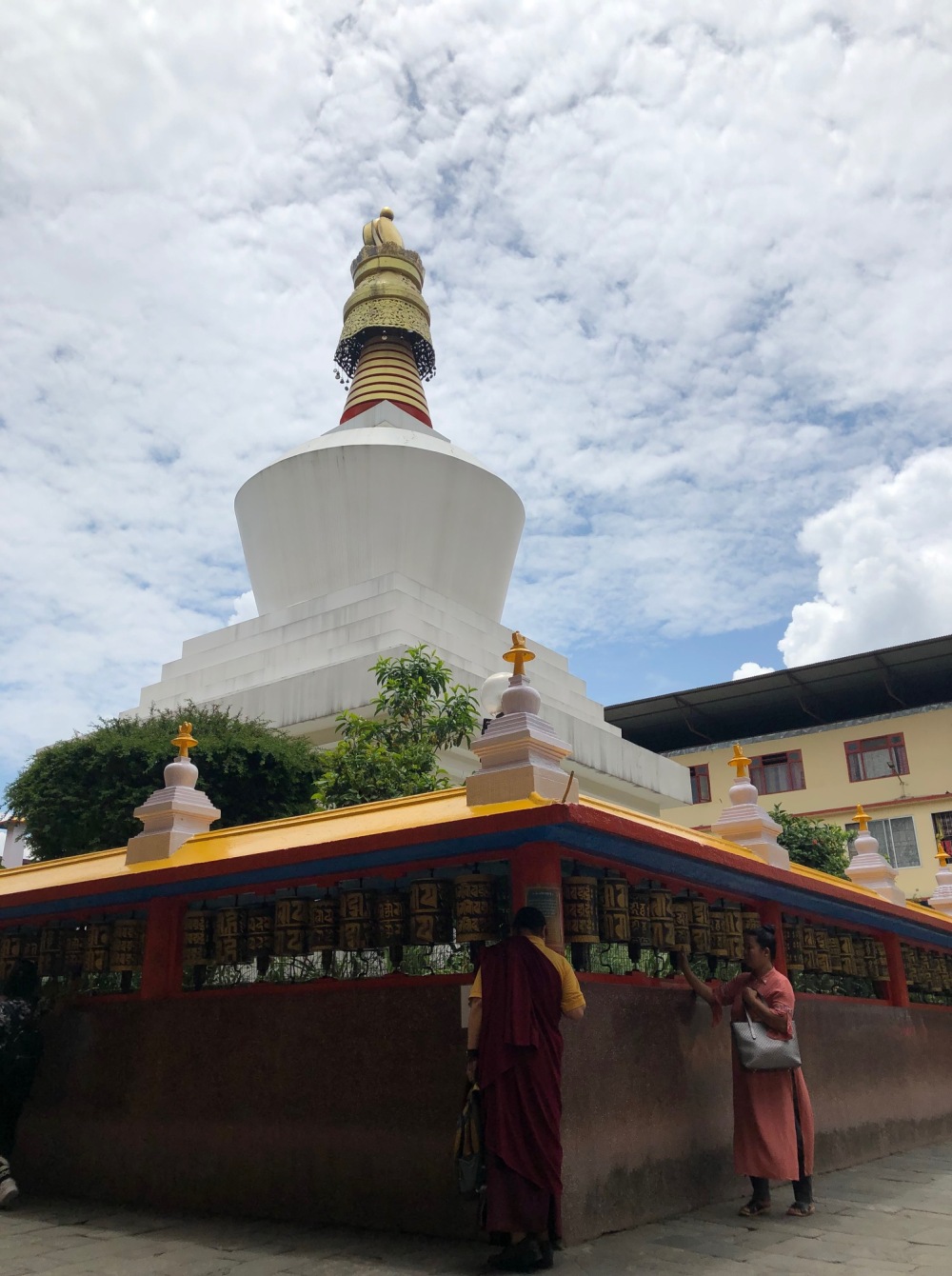 A young monk of about seven or eight, running frantically along the plinth towards me caught my attention. He saw me looking at him closely and in a moment, tripped on his shemdap and fell face first on the concrete, a few feet away from me. I scrambled to help him up and asked if he was alright while he sat down to check for bruises. He dusted his hands clean and adjusted the heavily soiled sleeves of the mismatched hoodie he wore under all his clothes. I introduced myself and asked him what his name was, to which he responded with “Phurba”. He got up very quickly and said that the others were waiting for him so they could start their game. When asked if I could join too, he stopped to think for a few seconds, wiped his leaky nose with the back of his palms, after which he reluctantly nodded and signalled me to follow him.

Phurba trotted in front of me down the rocky path with conditioned steps, humming an unfamiliar tune occasionally interrupted by sniffles. I wondered, what could have led a playful, young soul to travel far away from home and live the life of a monk at the monastery.

The path was connected to a set of rocky steps which led us down to the younglings’ living quarters and learning centre. All of the little ones looked on excitedly, yet shyly, as an outsider walked all the way across their atrium down to the field alongside the learning centre. Phurba immediately ran on to join his buddies in the field for what seemed to be a simplified version of hopscotch, forgetting all about the stranger who had followed him all the way down there.

By then, I was already looking in through the red wooden window, very intrigued by the sight of young adolescent monks leaning over very low tables, sitting on carpets spread out in rows. Some were fidgeting, some were reading and writing very intently, some trying not to fall asleep while some seemed to be lost in thought. 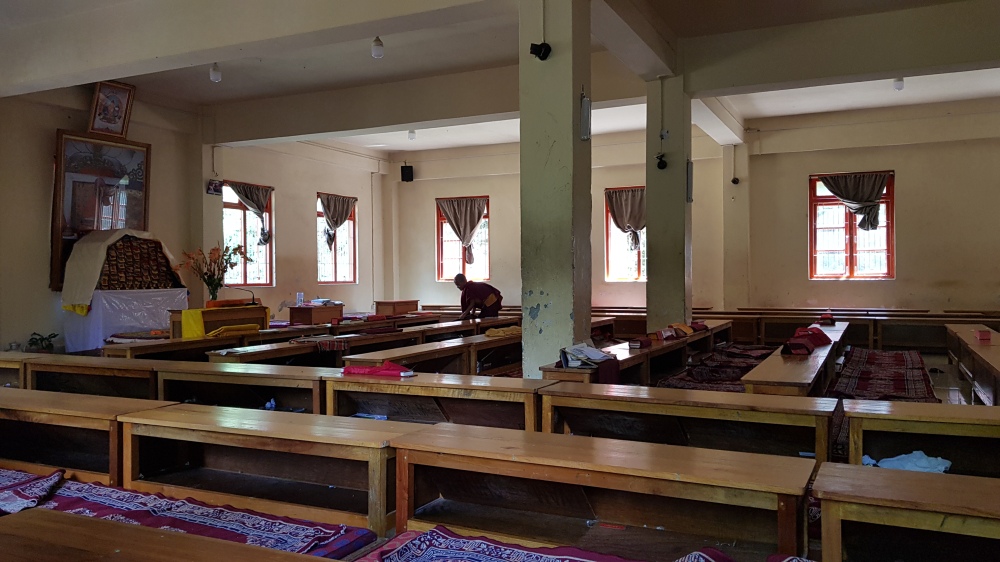 I was interrupted by the sound of somebody clearing their throat behind me. A monk, roughly about the same age as me, greeted me in Nepali and said politely “Their study will be over in a while; Are you looking for something?” I expressed that I wanted to speak to and interact with a few Lamas because I was curious about the life they lived in the monastery, their study, practices and principles. “He will give you all the answers you need”, he said pointing in the direction of a door near the building’s entry, with prayer flags draped over it’s top.

The chamber belonged to Wangchuk Gyeltshen, a monk in his early thirties, who served as one of the six Gurujis at the Chorten Lobdra. A calming aura came over me as I walked into the room. The musky scent of burning incense, probably sandalwood, engulfed me as I let the aroma awaken my senses. A pile of neatly folded clothes in shades of yellow and maroon were illuminated by the sunrays pouring in through the open window next to the mattress on the floor. Pictures of religious leaders and framed manuscripts adorned the walls. A dilapidated book lay open next to his pillow with an old photograph of two young boys shyly posing in their school uniforms, tucked carefully into the crevice between the pages.

Wangchuk Gyeltshen is originally from Bhutan, just like the majority of the 700+ monks that inhabit the Chorten Gompa. He never liked going to school. The very thought of sitting in class having to learn the bewildering concepts of science and mathematics gave him nightmares. He used to often find himself in tears at school because he did not want to be in a place which made him lose his peace of mind. After the death of his father in 1995, he decided to follow his uncle all the way across borders into Sikkim to study the holy scriptures and live the life of a monk. A week at the monastery was all it took to cleanse the sorrow out of young Wangchuk’s heart and he finally felt at home. A month later, his younger brother joined him at the monastery but he returned home shortly after, being unable to adjust to monastic life.

Monkhood is not necessarily a lifelong commitment. If somebody wishes to return to lay life, they may do so at any point. Initially, young boys who choose the life of monkhood do not understand what they are getting themselves into. It is not easy to renounce the infinite pleasures the world has to offer and swear to live a minimal life away from everything you could’ve had. Many monks give up and return to their families after being unable to find satisfaction and a sense of higher purpose in a life where attachments are forbidden.

Wangchuk went on to explain how it was so much simpler during their time, as they did not have smartphones, television and technology to distract them. Technology amplifies temptation tenfold, with everything the internet has to offer and the heightened image it creates of the world outside. “Internet is the new Guruji, there is nothing that the internet does not know. Infact, it knows too much.” However, monks who have been studying for more than seven years are allowed to use phones. Every other weekend, the younglings are shown movies and videos about the scriptures and other informative matter. As the world outside advances, it is important for religious institutions to adapt and upgrade in accordance.

At the Lobdra, younglings are taught the way of the monk as envisioned in the Vinaya Pitaka. The Vinaya lays down the guidelines for the rules to be followed by monks and nuns to lead a life moulded by discipline and kindness. Restraining body, speech and mind takes enormous amounts of mindfulness. Hence, perfecting the art of meditation forms an important segment of the curriculum.

The initial teachings revolve around the Three Poisons, namely, Anger, Greed, and Ignorance. They cause Samsara which is often defined as the endless cycle of birth, death, and rebirth. It is the world of suffering and dissatisfaction, the opposite of Nirvana, which is the condition of being free from suffering and the cycle of rebirth.

Giving in to anger is seen as a form of weakness. The root of anger can be traced down to attachments. Attachments instil the fear of losing our loved ones. Anger can be managed by practicing forgiveness and being patient with those around us. The reason people are usually never happy, is greed. No amount of material or emotional substance is enough to satisfy the black hole we fondly call temptation. Ignorance can only be countered by wisdom. Monks are expected to spend a large chunk of their lives learning, sharing what is learned and contemplating their own actions in order to know right from wrong, correcting and guiding themselves as they continue their journey on the righteous path.

Wangchuk’s sermon was interrupted by a knock on the door. Two little freshly shaved heads popped in through the door and they exchanged a few sentences in Dzongkha with their Guruji while excitedly brushing their hands over their heads. Monks today shave off their heads in order to discourage vanity through grooming.

The two ran off giggling leaving the door wide open. Wangchuk got up to close the door, with a wide smile across his face and he went on to tell me how the two little boys had taken an interest in traditional art and they were to be introduced to the monk in charge of the paintings. Monks who do not excel in studying the scriptures find their calling in other fields such as painting, craft, calligraphy, musical instruments, dance, cooking, fabrics etc. They are trained within the monastery as much as possible but going to other institutes to pursue further study is an option.

“There is no end to learning. That is why I enjoy teaching the little ones so much. There is so much I don’t know and teaching always takes me back to my books, back to learning. I find joy in being able to answer their questions and helping them grow.” 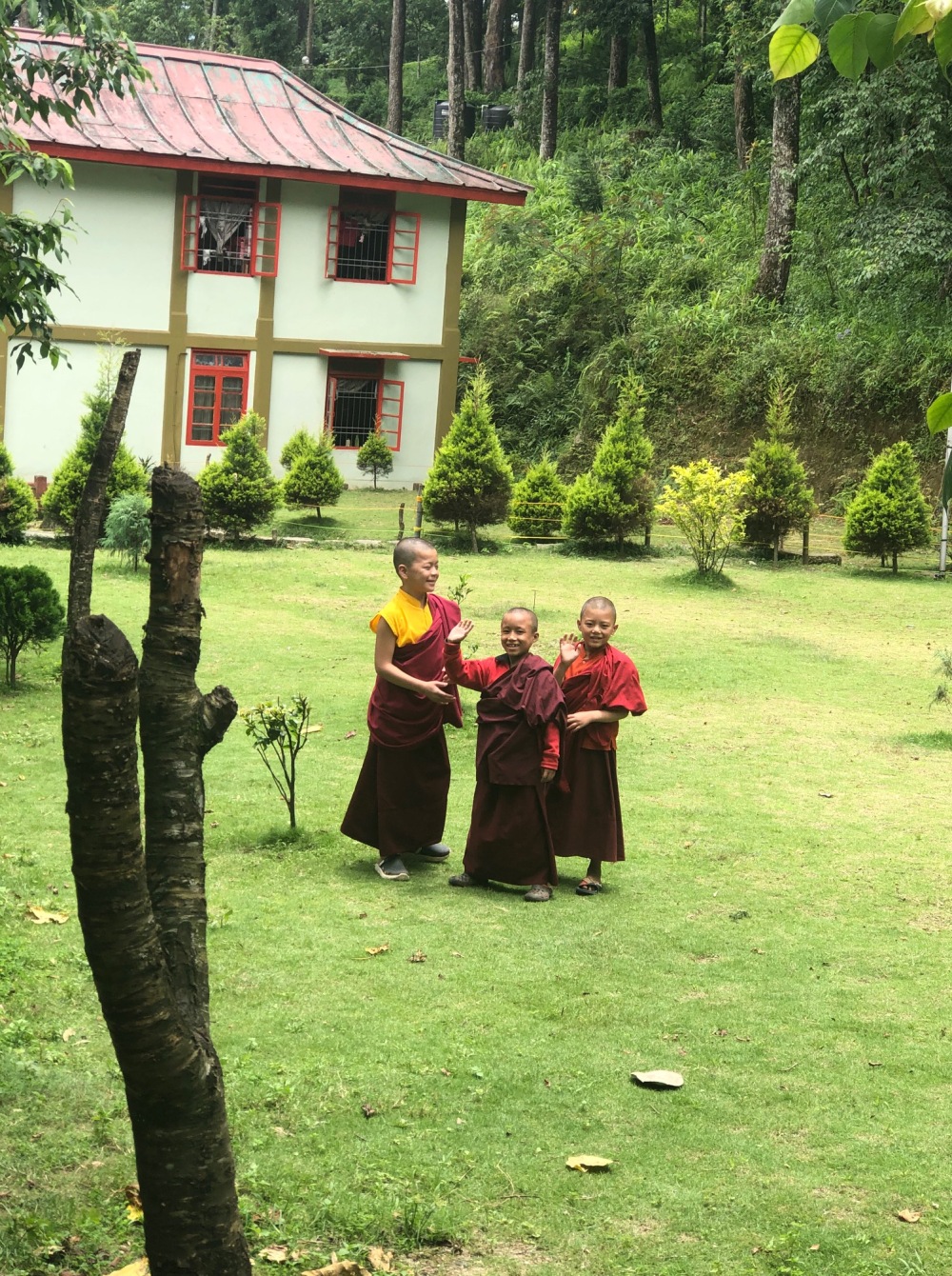 As I gathered my belongings to leave, I glanced at Wangchuk Gyeltshen’s face. It was the face of a man who was at peace with himself and with the world around him. An expression most of us fail to achieve in a lifetime. The wrinkles on his face very fresh and young, only having just emerged, made him look wise beyond his years.

Outside, Phurba and his friends had moved onto a different game. Phurba celebrated with a little dance when he managed to land a large flat stone onto the pile of sand from a predetermined distance. He then went on to reassure his friend that he would win the next round. What does fate have in store for little Phurba? Will he grow up to be a man much wiser and more kind than his Guruji? Or will he give up life at the monastery and go back to living with his family?